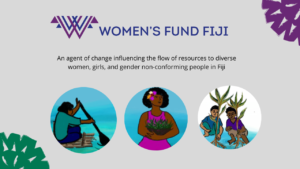 Today marks a major milestone for Women’s Fund Fiji (the Fund) as it celebrates its FIRST birthday as an independent entity.

The Pacific’s first national women’s fund, the Fund has come a long way to achieve its independent status.

Beginning implementation in 2017 as a five-year initiative of the Australian Government’s Pacific Women Shaping Pacific Development (Pacific Women) program, the Fund committed up to AUD10.5 million from 2017 to 2022 to fund and build the capacity of women’s groups, organisations and networks in Fiji to expand and enhance their work on gender justice and human rights. The Fund became a local registered entity under Fiji’s Charitable Trust Act in July 2021.

Reflecting on the transition journey, pioneering Fund Manager (2017 to March 2022), Michelle Reddy said the Fund’s transition to an independent entity had been an exciting journey.

“We started thinking about what that would like towards 2018, and in 2019 we started processes such as the development of the Trust Deed. We knew at that time that the Trust Deed development needed to have input from our partners, so we took a very participatory approach in reaching out to our partners and our sister funds on what our governance structures would look like and what our mission and vision were. We also developed our very first Strategic Plan that also then culminated in the registration of the Fiji Women’s Fund as the Women’s Fund Fiji,” she said.

Michelle added the transition to an independent entity took a long time. There were legal requirements that had to be considered such as the registration, and the Fund’s obligations as a registered entity under the Fiji Charitable Trust Act. Being managed by a managing contractor at that time, there were also shifts in the Fund’s internal processes and operations.

“We had to develop our own policies, put in place new contracts with staff members, think about our identity and how to communicate that to the world. So I am really excited about the Fund’s first birthday as an independent entity. It’s such a milestone-I am thankful to the many individuals who have been part of our governance structures- our allies and partners, the sister funds from Prospera International Network of Women’s Funds, our different funders, and of course the team. Without the team, this would not have been possible, so happy, happy birthday Women’s Fund Fiji, and congratulations!” she said.

Women’s Fund Fiji Executive Director, Menka Goundan said “the Fund has had many pioneering moments in the last year, and we are excited for the many milestones that is in our Strategic Plan for the coming years. As we begin assessing our first set of grants as an independent entity, we are proud to say that many grassroots and community women’s groups, networks and organisations have applied and are being assessed for potential grants.”

Menka added that the Fund is continuing its efforts to diversify funding sources, and in the future hopes to venture into new sources of funding that will strengthen and add to the Fund’s role as the resource mobilisation arm of the women’s movement in Fiji.

“I thank all those who have contributed to the Fund’s journey in the past year and look forward to the exciting future for the Fund and its partners. Wishing the Fund all the success on its birthday!” she said.

Women’s Fund Fiji is the Pacific’s first national women’s Fund. It is an empathetic and adaptive feminist fund working to influence and mobilise financial and non-financial resources for feminist and women’s rights organisations and movements, so they can progress the human rights of women, girls, and gender non-conforming people in Fiji. The Fund became registered as an independent entity under Fiji’s Charitable Act in July 2021.

For more information about the Fund and this release, contact the Fund’s Communications Officer, Onorina Saukelo, on +679 702 1507 or email: onorina.saukelo@womensfundfiji.org